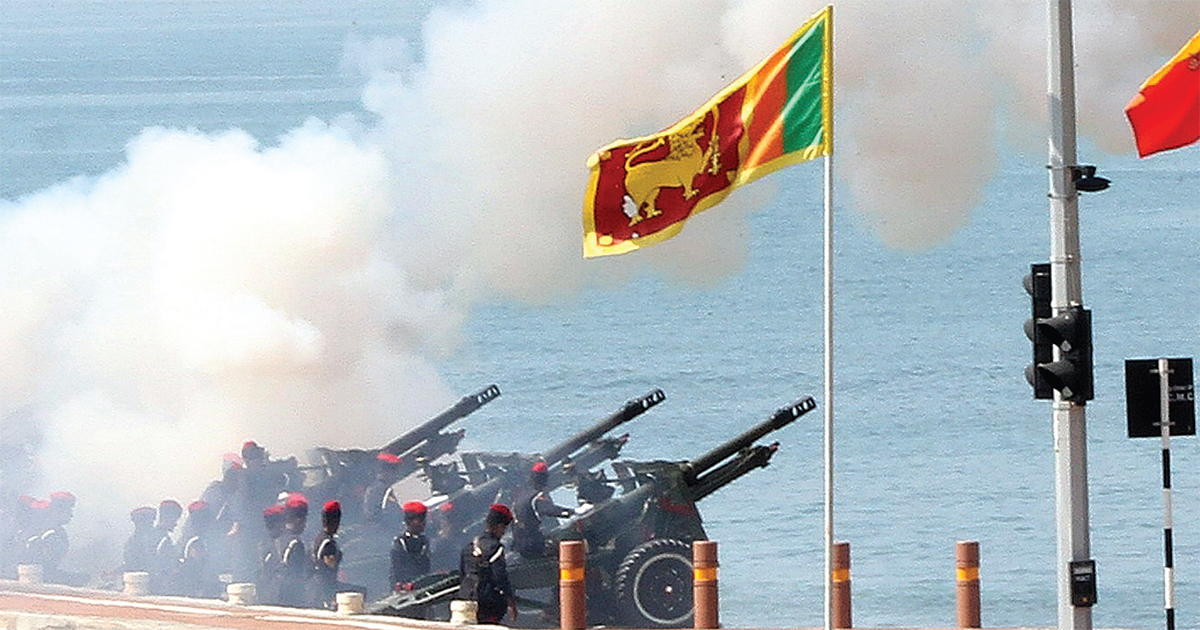 Consider the state of chaos and confusion that reigned in Sri Lanka during the constitutional crisis in late 2018 and 4/21 only a few months later, and it comes as little surprise that business has had to work overtime to stay afloat.

And likewise, LMD-Nielsen Business Confidence Index (BCI) also remained volatile for much of 2019.

The latest edition of the LMD 100 presents a detailed analysis of how Sri Lanka’s leading listed entities performed amid the mayhem for most of financial year 2018/19, the results of which can be broadly termed as a mixed bag.

LEADERBOARD The LMD 100 is spearheaded by the export oriented conglomerate Hayleys, which has strengthened its presence among Sri Lanka’s listed corporates.

Meanwhile, diversified holdings – together with representatives from the finance, banking, telecommunications and oil palms domains – are staking their claim to fame as dominant forces on the LMD 100 Leaderboard for financial year 2018/19. 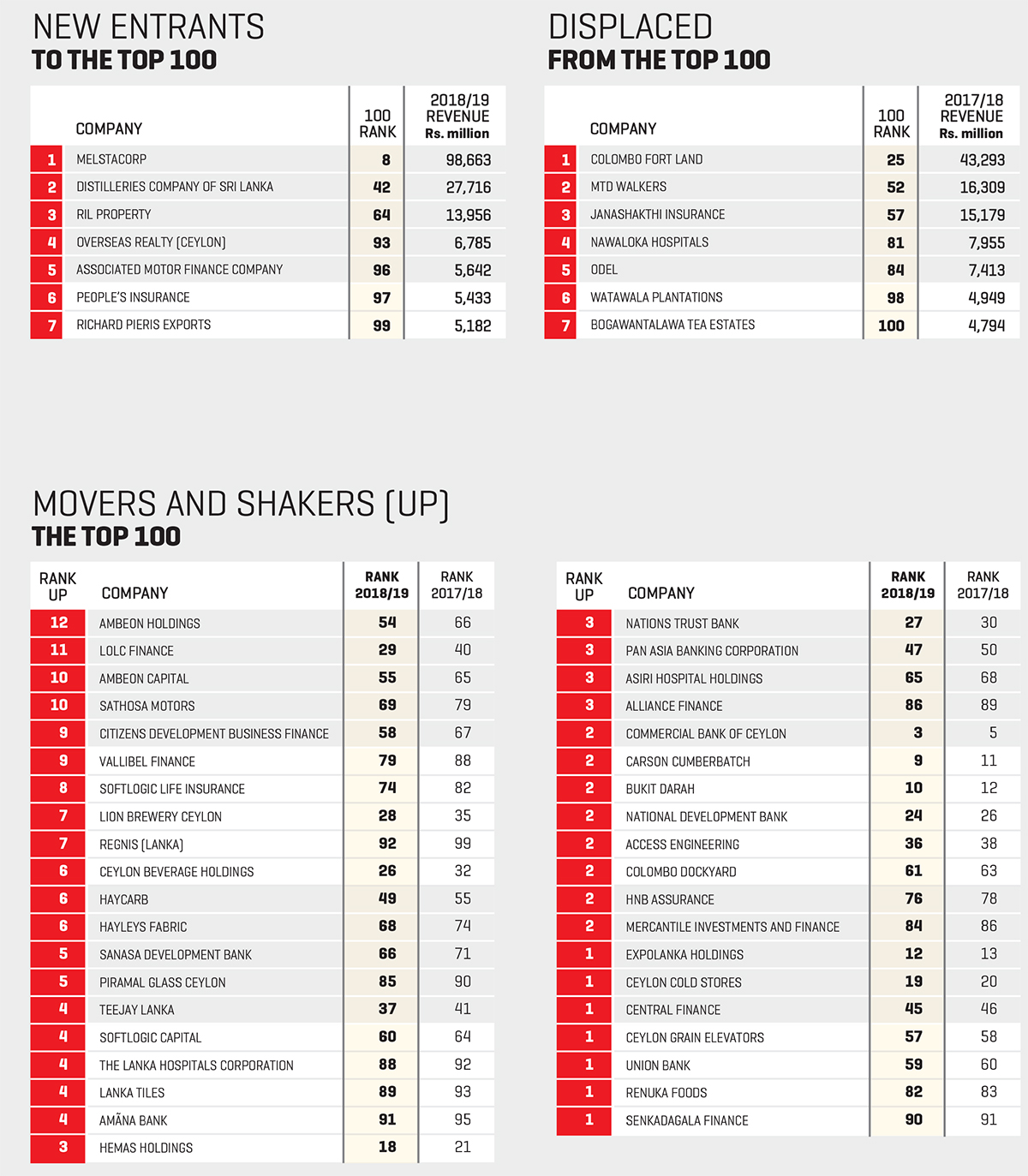 John Keells Holdings (JKH) was ranked No. 1 in as many as eight of the first 10 years of The LMD 50 (the pioneering precursor to the LMD 100), only to be surpassed by Sri Lanka Telecom (SLT) – a partnership between the Govern ment of Sri Lanka and Malaysian telecom giant Maxis, which went public in 2003.

SLT in turn helmed the rankings for four consecutive years before surrendering its rung at the top of the ladder to the petro giant from neighbouring India – Lanka IOC (LIOC) was The LMD 50’s numero uno until 2009/10 with its reign lasting three financial years.

Turning to the latest LMD 100 pecking order, Hayleys retains the No. 1 spot while LOLC Holdings (LOLC) stands in second place once again. Commercial Bank of Ceylon (ComBank) climbs up to third place and is followed by Hatton National Bank (HNB). JKH rounds off the top five in the latest edition of Sri Lanka’s premier listed company rankings.

Sampath Bank (No. 6), Dialog Axiata (in seventh place) and Melstacorp (No. 8) make up the remainder of the Leaderboard, alongside Carson Cumberbatch and Bukit Darah (they’re ranked ninth and 10th respectively).

REVENUE STREAMS Aggregate revenue of the island’s 100 largest quoted companies amounted to Rs. 3,705 billion in 2018/19, which is the equivalent of an annual growth of 15 percent – in the period under review, the official rate of inflation stood at 2.1 percent so the LMD 100’s combined top line is certainly in positive territory.

In the previous financial year, the aggregate turnover of LMD 100 companies improved by 18 percent while inflation stood at 6.6 percent.

As many as 49 (versus 46 in the preceding year) LMD 100 entities registered an annual turnover of more than 20 billion rupees in financial year 2018/19 – and furthermore, the seven highest ranked corporates (Hayleys, LOLC, ComBank, HNB, JKH, Sampath Bank and Dialog) surpassed the Rs. 100 billion mark.

In the context of revenue growth, RIL Property comes out on top with a 212 percent year on year uptick (to Rs. 14 billion), making it one of four entities to report a top line improvement in excess of 50 percent for the financial year.

BOTTOM LINES At Rs. 279 billion, the 2018/19 cumulative post-tax profit of the LMD 100 weakened by seven percent compared to the previous year.

As for other landmarks, the profit after tax of LOLC, ComBank, HNB, JKH, Sampath Bank and Ceylon Tobacco Company (CTC) crossed the Rs. 10 billion mark in financial year 2018/19.

TAXATION On average, an LMD 100 entity forked out 1.1 billion rupees in taxation for 2018/19, which represents virtually no change from the previous year’s tax bill.

As in the past, CTC’s contribution to state coffers during the period was the highest among the nation’s listed companies on account of a tax charge of more than Rs. 10 billion. 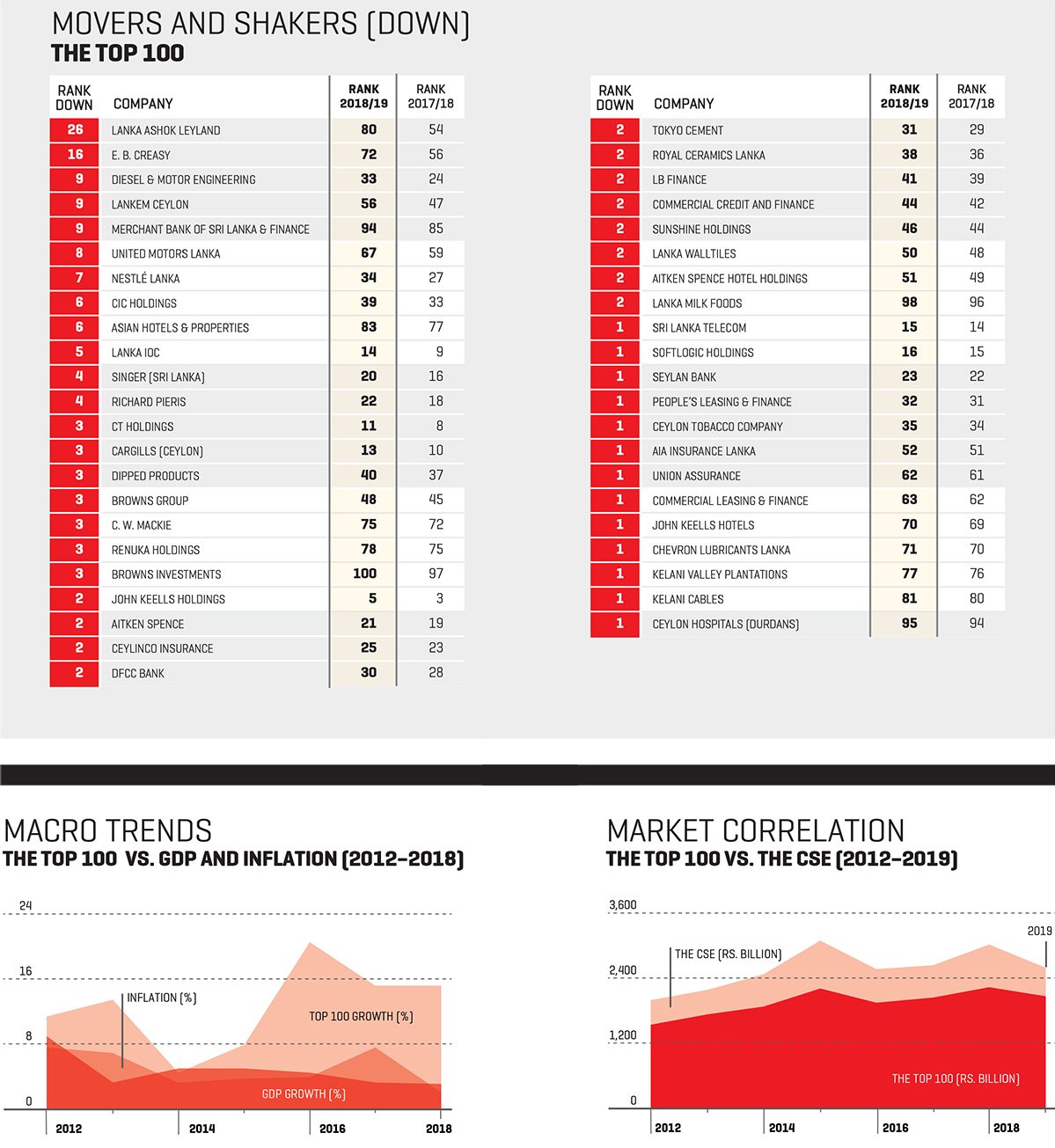 ASSET VALUES The largest listed entities in Sri Lanka enjoyed a 14 percent appreciation in total assets from the previous year, which is broadly in line with the uplift in asset values recorded in both 2017/18 and 2016/17.

The banking sector holds sway in the LMD 100’s asset related rankings as it represents almost half of the combined portfolio of assets of the premier listed entities in Sri Lanka.

ComBank continues to be at the forefront of balance sheet strength with Rs. 1,320 billion in assets at 31 December 2018, followed by fellow private sector banking giant HNB (Rs. 1,149 billion) and LOLC (Rs. 1,044 billion).

Meanwhile, Softlogic Life Insurance is ahead of the pack for highest percentage gain in asset values among the top 100 – its total assets of 17 billion rupees reflected a 39 percent appreciation from the end of the preceding year. E. B. Creasy is next in line on the back of a 38 percent uplift in asset values in 2018/19.

MOVERS AND SHAKERS Ambeon Holdings made the most notable progress in the climb up the listed company rankings by moving 12 spots in the top 100 list to No. 54. LOLC Finance also achieved a similar distinction by jumping 11 places up the LMD 100 scale to 29th place.

In sum, as many as 39 of the island’s largest corporate entities climbed up the LMD 100.

SECTOR RANKINGS Diversified holdings lead the way amongst the leading listed companies in Sri Lanka with their cumulative income representing 30 percent of the LMD 100’s combined revenue and 27 percent of shareholders’ funds in the period under review.

The banks follow as the second largest player in the LMD 100 with an aggregate income in excess of Rs. 660 billion and a share of 18 percent of cumulative revenue in the 12 month period. What’s more, the sector accounts for a quarter of LMD 100 profits and shareholders’ funds in 2018/19.

INVESTOR YARDSTICKS CTC leads the way with a market capitalisation of Rs. 251 billion at 31 March 2019 and is followed by JKH, which registered a market cap of 206 billion rupees at the end of financial year 2018/19.

Similar to its tally in the preceding financial year, 10 of the island’s 100 leading listed corporates maintained an equity value in excess of 50 billion rupees at the end of 2018/19. The top five (CTC, JKH, ComBank, Nestlé Lanka and Dialog) accounted for a little over a third of the LMD 100’s combined market cap.

THE FUTURE In September, the Ceylon Chamber of Commerce launched a working draft of the Sri Lanka Economic Acceleration Framework (SEAF) 2020-25, which identifies over 140 interventions to be implemented in driving Sri Lanka’s GDP from US$ 89 billion (2018) to 134 billion dollars by 2025, propelling GDP growth during the period to an average 6.8 percent.

The chamber elaborates: "To achieve this growth trajectory, we have proceeded on the assumption that there will be social and gender inclusiveness, sustainability and good governance."

"The policy environment has improved after the resolution of last year’s political standoff. The 2019 budget was passed, and the IMF programme resumed and was extended by one year to June 2020. The IMF staff recently announced an agreement on the sixth review of the extended fund facility (EFF)," it adds.

While noting that the currency appreciated by about three percent against the US Dollar by the end of the first half of 2019, after weakening by nearly 19 percent at end-2018, the rating agency said at the time that with Sri Lanka entering an election cycle, "the risk of policy slippage and political tensions resurfacing closer to the elections remains high."

As for international affairs, the IMF’s World Economic Outlook (WEO) published in October points to global growth of three percent in 2019 – that is its lowest level since 2008/09 and a 0.3 percentage point downgrade from the April WEO.

"Growth is projected to pick up to 3.4 percent in 2020 (a 0.2 percentage point downward revision compared with April), reflecting primarily a projected improvement in economic performance in a number of emerging markets in Latin America, the Middle East, and emerging and developing Europe that are under macroeconomic strain," the IMF reports.

However, it adds: "With uncertainty about prospects for several of these countries, a projected slowdown in China and the United States, and prominent downside risks, a much more subdued pace of global activity could well materialise."

The IMF also notes that momentum in manufacturing activity in particular has weakened substantially to levels not seen since the global financial crisis whereas rising trade and geopolitical tensions have increased uncertainty about the future of the global trading system, and international cooperation more generally "taking a toll on business confidence, investment decisions and global trade."

And it concludes: "A notable shift toward increased monetary policy accommodation – through both action and communication – has cushioned the impact of these tensions on financial market sentiment and activity while a generally resilient services sector has supported employment growth. That said, the outlook remains precarious."